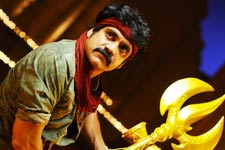 Ravi Kandala / fullhyd.com
EDITOR RATING
7.0
Performances
Script
Music/Soundtrack
Visuals
7.0
7.0
5.0
8.0
Suggestions
Can watch again
Yes
Good for kids
Yes
Good for dates
No
Wait to rent it
No
There was a time when Vittalacharya was a force to reckon with. He used to make movies with magicians, demons, beautiful princesses and handsome princes who would rescue these princesses. Damarukam takes us back to that day and age. And it does so brilliantly, once we are willing to accept the premise.

The story of the flick revolves around Andhakasura, a rakshasa who went into hibernation aeons ago with an aim to come out at an opportune time. That time comes now, with the birth of a girl Maheswari (Anushka). Maheswari is born with the grace of goddess Parvati.

The rakshasa believes that by marrying and then sacrificing Maheswari, he can bring back the glory of his clan. How Mallikarjun/Malli (Nagarjuna) manages to save her and thwart the demon's plans forms the rest of the movie.

The plot does sound pretty bare, but is buffered by a subplot involving Lord Shiva (Prakash Raj), who comes to Earth to protect and guide Malli in his mission.

The first 15 minutes of the movie is spell-binding, with some beautiful graphic work, and sets the tone for the remaining runtime. The first half goes on with some plot establishment, some comedy, and a few songs, leading to an interesting interval block. It is in the second half post the entry of Rahul (Ganesh Venkatraman) as Anushka's suitor that the story gathers momentum. The climax is grandly conceived,and equally well-executed, though it has a slight videogame feel to it.

What wows you about Damarukam is the fact that the director takes an audacious plot device and manages to come out unscathed. The cards are dealt out very early in the movie, and not for a minute are we left in doubt that the film will require us to suspend our belief. At a time when an increasing number of kids look to Hollywood for mythological or fantasy flicks, Damarukam tells us that there are a plethora of stories that can be woven around our own epics. All one needs is plenty of imagination, and the story will present itself.

Nagarjuna does all that the plot demands of him, including showing off a six-pack for a few seconds. Here is an actor who gives in completely to the director's vision. Anushka looks as pretty as ever, and though she has put on a few extra kilos, her tall frame doesn't make her look awkward.

Ravi Shankar, known so far as Sai Kumar's brother and the voice of Sonu Sood in Arundhati, plays the rakshasa with elan. The role required a loud and extravagant performance, and he does not hold back. It is slightly difficult to accept Prakash Raj as God, but he is fine. Brahmanandam, Raghu Babu, Krishna Bhagwan and M S Narayana are there for a brief while, and do a decent job.

Technically, the movie is a superior product, and has pretty impressive graphics work. The production values are grand, and the director makes sure every rupee spent is seen. DSP's music is good, but the songs are just speed-breakers in what should have been a very taut narrative minus the masala movie hurdles like comedy and duets.

Srinivasa Reddy, the director who largely had small budget comedy flicks to his name, delivers a big movie with elan, proving Nagarjuna's statement in the audio release that there is no "big" or "small" director - it all indeed boils down to conviction, and that shines through. The producer, R R Venkat, who fully backed his director's vision, also needs to be commended.

Damarukam is a throwback to the days when stories from popular folklore ruled the roost, and fantastic premises came alive thanks to the imagination of storytellers. Go watch it, if only to recall that era.
Share. Save. Connect.
Tweet
DAMARUKAM SNAPSHOT 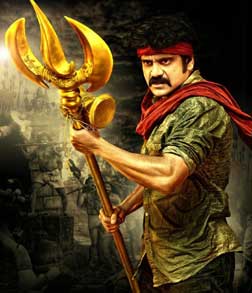 ADVERTISEMENT
This page was tagged for
damarukam movie on link
Damarukam telugu movie
Damarukam reviews
release date
Nagarjuna, Anushka Shetty
Follow @fullhyderabad
Follow fullhyd.com on
About Hyderabad
The Hyderabad Community
Improve fullhyd.com
More
Our Other Local Guides
Our other sites
© Copyright 1999-2009 LRR Technologies (Hyderabad), Pvt Ltd. All rights reserved. fullhyd, fullhyderabad, Welcome To The Neighbourhood are trademarks of LRR Technologies (Hyderabad) Pvt Ltd. The textual, graphic, audio and audiovisual material in this site is protected by copyright law. You may not copy, distribute, or use this material except as necessary for your personal, non-commercial use. Any trademarks are the properties of their respective owners. More on Hyderabad, India. Jobs in Hyderabad.