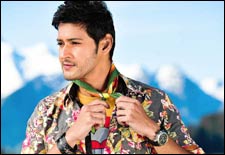 Deepa Garimella / fullhyd.com
EDITOR RATING
6.0
Performances
Script
Music/Soundtrack
Visuals
7.5
5.0
7.0
8.0
Suggestions
Can watch again
No
Good for kids
Yes
Good for dates
Yes
Wait to rent it
Yes
Let's face it - the year hasn't been very kind to a state parched for a decent entertainer from the stars that it worships. Although this has done a world of good to off-beat films like the deserving Ala Modalaindi, there has only been an occasional Mr. Perfect, and a Kandireega, that have revved up the film industry's fortunes.

So does this potentially explosive Sreenu-Vytla-Mahesh-Babu combination live up to the responsibility it is unwittingly carrying - that of bringing cheer back to a repeatedly disappointed audience? And does it live up to the hype? We're afraid not.

But frankly, and fortunately, none of that matters. It takes really, really bad writing to pull a film with the kind of star-power that Dookudu is stuffed with down, and Dookudu isn't all that bad. It may not have a memorable run at the box office, but it won't be a disaster either.

Dookudu is a formula movie, and is mildly entertaining as a one-time watch, but considering that it comes from an ace writing team, it has plenty of negatives.

So Ajay (Mahesh Babu) is this alpha male, a cop who is hunting an evil villain (Sonu Sood) who lives in Turkey and has underworld links in Mumbai. Ajay's father (Prakash Raj) was bumped off by his rivals (Kota Srinivasa Rao etc.) when Ajay was a kid, and so he has this flashback that returns to complicate his story.

Saying anything more about the story would be completely unfair to the film, but Vytla's trademark plot-within-plot device in Dookudu gets a little too much to handle. For example, Ajay masterminds this certain set-up, prior to which he cons different people in different ways just to get them all together.

Now we know there aren't enough writers out there who can even think up such concepts, but if the complexity of it all makes you too busy remembering characters to enjoy the show, there's some brilliance we can do without.

It isn't just the over-populated set of characters, either - most of whatever is happening out there is pretty absurd, and you can think of a bunch of obvious questions of logic the minute each sequence starts. There are no answers, obviously.

The comedy could have been worked on more, too. While the zillion references - both respectful and derogatory - to top actors (and one to a particular filmmaker) manage to rake in some laughs, there are a lot of other jokes that fall flat.

And there's only so much of "mind lo fix aithe blind ga vellipotha" that you can take. Save for the rare "nenu narakadam modalupedithe narakam lo kuda housefull board pedatharu", there are no great lines that will stay on. Most of the pompous dialogues are wannabe rather than brilliant, too frequent (which highlights their mediocrity), and look like their insertion was an end in itself.

For those who're wondering, there is little romance to mush about. Mahesh and Samantha look great together, but their chemistry doesn't continue once the heroine starts behaving like the dumb belle that every heroine does.

But if you're watching this for Mahesh Babu, you won't be too disappointed. He does everything he ought to do as a hero. Sadly, that is the point. Ajay is an easily replaceable character, and nothing more than a traditional Telugu hero. Dookudu could have as well been a Ravi Teja movie (in which case, by the way, it could have had lots more energy).

Samantha looks pretty and graceful, but there is one lightly obscene step, tucked away innocuously in one of the songs. And meanwhile, Sonia plays a character that our hero equates to Mumaith Khan, and insults. Indeed, if you can take two actresses who are more respected than lusted after by audiences, and make them do borderline vulgar things on screen, there's something wrong somewhere.

The comedians all do a good job, and Vennela Kishore and Shiva Reddy stand out. Brahmanandam and M S Narayana are repetitive and a bit tiresome. And Dharmavarapu and Srinivasa Reddy have been criminally wasted. Sonu Sood's villainy lacks punch - and what is with his grey-haired look so early in his career?

Thaman's music will rock the radio stations for some time, and the visuals are slick. The leading cast has been styled very well.

You could watch Dookudu since there's nothing better playing in town, and that means you should watch this soon, before something better does play in town.
Share. Save. Connect.
Tweet
DOOKUDU SNAPSHOT

See Dookudu full details
DOOKUDU USER REVIEWS
1 - 8 OF 8 COMMENTS
POSITIVE  |  NEGATIVE |  NEWEST  |  OLDEST  |  MOST HELPFUL  |  LEAST HELPFUL
USER RATING
8.0
9 USERS
Performances
Script
Music/Soundtrack
Visuals
8.5
7.5
7.6
8.4
Can watch again - Unsure
Good for kids - Unsure
Good for dates - Unsure
Wait to rent it - No
Chabbi28 on 29th Nov 2011, 7:06am | Permalink
keka
Saradhi on 17th Oct 2011, 3:51pm | Permalink
Thokkalo cinema. Boring. Got headache with this movie. Except the Parvathi Melton song rest of the movie is crap. Dialogues are partially good. Copy music. Especially music is copied from the old classics "nee illu bangaaram kaanu", helen's "Monica....oh..my darling", Bappi Lahiri's "lawaris". Previously Chakri and Patnaik used to do that, now Thaman has taken up that copying job. The last song is an absolute joke and absurd. Following the same old style, a fight and song in hero's entry, one song after one hour, second song soon after interval and a mass song at the end. Stupid movie. Do you say it as comedy? I did not laugh in the entire movie, not only me none of them around me were laughed. Waste movie. Wait for DVD.
Ch on 17th Oct 2011, 1:52pm | Permalink
The movie is definitely worth watch!!
I sincerely urge Deepa to give review based for Telugu Audiences. I mean Telugu Movies for Telugu Audiences. Instead you try to give review international standards.
Coming back to the movie!!
I had high expectations while going to watch this movie bcos I was watching the movie after 2 weeks of release and the movie got great reviews and collections.
The movie has all telugu masala and trademark Vytla written all over it. He is one of the talented director who can incorporate tremendous screenplay and comedy scenes.
Mahesh Babu has done tremendous acting in the movie. His Comedy timing, Dialogues and screen presence is amazing.
Bramhi has excelled in comedy!!
The only complain I have in this movie is running time and fight sequences. The movie can be trimmed to 15 to 20 mins.
Overall A full PAISA VASOOL Movie!!
Definitely worth Watching!!


Pros: Mahesh babu, Comedy,Screenplay
Cons: Fight Sequences, Run time
Jay on 15th Oct 2011, 6:52pm | Permalink
Comedy movies are of two types. One comedy is embedded into the story. Two comedy is the story. This movie is of type two, an Allari Naresh trade mark movie. I put my money on crew of scrap.


Pros: Samantha, Brahmi
Cons: What not?
RATING
2
kalyani on 15th Oct 2011, 5:34pm | Permalink
I did not like anything in the movie except for Samantha. But I liked Deepa's review a lot.


Pros: MAHESH ACTION
Cons: NOTHING
anon_critic on 24th Sep 2011, 8:38pm | Permalink
I saw the movie after reading this review. Agree with most points except a few - it must really take a reviewer or critcs eyes to spot vulgarity in this movie and dont think sonia's character is all that insulting to sonia or mumaith (not clear from this review who is insulted and why?). Im no mahesh fan and raviteja would have done well too, but dont agree it would have been more energetic. Raviteja is good, but he is not a yardstick[same reference in kandirega review]. Something to watch out for in this sites reviews. Coming to movie, length and sound - both should have been taken care of. can be watched once in the hall and many times on tv/dvd.

ADVERTISEMENT
This page was tagged for
dookudu full movie
Fortune Dookudu
Dookudu telugu movie
Dookudu reviews
release date
Follow @fullhyderabad
Follow fullhyd.com on
About Hyderabad
The Hyderabad Community
Improve fullhyd.com
More
Our Other Local Guides
Our other sites
© Copyright 1999-2009 LRR Technologies (Hyderabad), Pvt Ltd. All rights reserved. fullhyd, fullhyderabad, Welcome To The Neighbourhood are trademarks of LRR Technologies (Hyderabad) Pvt Ltd. The textual, graphic, audio and audiovisual material in this site is protected by copyright law. You may not copy, distribute, or use this material except as necessary for your personal, non-commercial use. Any trademarks are the properties of their respective owners. More on Hyderabad, India. Jobs in Hyderabad.