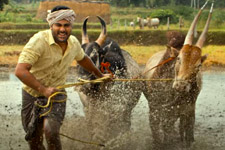 Anil Bandhakavi / fullhyd.com
EDITOR RATING
6.0
Performances
Script
Music/Soundtrack
Visuals
6.0
6.0
5.0
6.0
Suggestions
Can watch again
No
Good for kids
Yes
Good for dates
Yes
Wait for OTT
No
Sreekaram is a touching drama that plays out in a rural setting and addresses attitudes regarding professional success, the deep and sensitive relationship between a father and a son, and conflicts between impressionable villagers who get swayed easily by those looking for dominance. Written by Kishor B and Sai Madhav Burra, the film is centred around the issue of farming, but the story is about a boy who is inspired by his father to come back to his village and follow in his footsteps.

Karthik (Sharwanand) is a successful software engineer, and a thoughtful and upright man by nature. His father, Kesavulu (Rao Ramesh), a farmer by profession, is extremely proud of Karthik's progress in the white-collar world. He even has a plaque outside their village home with Karthik's name and the title "Software Engineer" underneath. Karthik also proactively helps out with the family's financial obligations, which multiplies his father's admiration for his grown-up son. "Anything Karthik does is right", is Kesavulu's policy.

Ekambaram (Sai Kumar) is a resident of the same village as Kesavulu, and has finagled his way into the local zamindar's home by courting his daughter. The zamindar, a philanthropist who is loved by the villagers, dies soon after his daughter's wedding, and Ekambaram takes his place. However, Ekamabaram finds out that his father-in-law had distributed his land to the villagers before his death. He then starts swindling the land back into his possession by putting on a helpful front and buying back the land for cheap from the farmers in times of financial strife.

Karthik continues to rise in his profession and is offered a position in the US. His father is elated. However, Karthik leaves it all and decides to take up farming. This upsets Kesavulu a great deal, as he believes that Karthik is taking a step back. Nevertheless, Karthik pushes forward with his plans, and proposes a strategy to the farmers of the village to collectively maximise their output and profits. He applies new-age processes to optimise their work. However, he has both his disapproving father and a conniving Ekambaram to reckon with.

The main ideas in Sreekaram are conveyed implicitly by a story that is thickly laced with situations that will tug at your sentiments. The father-son conflict between Kesavulu and Karthik takes centre-stage and arouses an emotional response in the second half.

The movie's message is also cleverly presented through the story without making any blatant digressions. Karthik is a logical person who thinks progressively and looks to farming as an area where there is immense potential to apply new techniques - just like the IT world presented fertile land for immense growth at the turn of the century. He believes that farmers' children should also proudly take up farming, just like a doctor's kid would not think twice about the medical profession.

Sharwanand's performance is fitting for Karthik's character, but it's a little unclear whether his stoic demeanour was planned to the extent that it shows. Rao Ramesh is exactly what you'd expect from a village father who's proud of his city-dwelling son, but not entirely sure what he does. Priyanka Arulmohan, who plays Chaitri, the girl who herself has to court Karthik as he has no time for such pursuits, has more screen-time than any real impact on the story - she's just there to support Karthik's beliefs, and meet the requirement for the presence of the opposite sex. The writers could've done a little more with her, which would've also opened up Karthik's personality a little more.

Technically Sai Kumar plays the villain, Ekambaram, as he's there to thwart Karthik's efforts to maintain his own dominance. However, this conflict is dull in comparison to the rift that forms between Kesavulu and Karthik, which turns out to be the real antagonism in the film.

From start to finish, the greatest strength of Sreekaram is the emotional connection that it invokes. The story is not brilliant, and some of the imbalances could use some work, but it still facilitates a medium over which the feelings are conveyed with commendable depth. The inspirational touch behind the message is also just right and not in your face. Sreekaram is a good outing for the family.
Share. Save. Connect.
Tweet
SREEKARAM SNAPSHOT 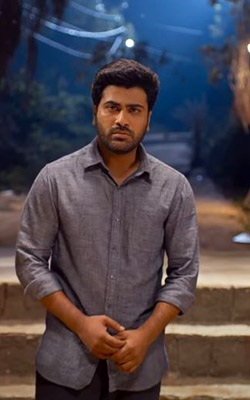 ADVERTISEMENT
This page was tagged for
Sreekaram telugu movie
Sreekaram reviews
release date
Sharwanand, Priyanka Arul Mohan
theatres list
Follow @fullhyderabad
Follow fullhyd.com on
About Hyderabad
The Hyderabad Community
Improve fullhyd.com
More
Our Other Local Guides
Our other sites
© Copyright 1999-2009 LRR Technologies (Hyderabad), Pvt Ltd. All rights reserved. fullhyd, fullhyderabad, Welcome To The Neighbourhood are trademarks of LRR Technologies (Hyderabad) Pvt Ltd. The textual, graphic, audio and audiovisual material in this site is protected by copyright law. You may not copy, distribute, or use this material except as necessary for your personal, non-commercial use. Any trademarks are the properties of their respective owners. More on Hyderabad, India. Jobs in Hyderabad.