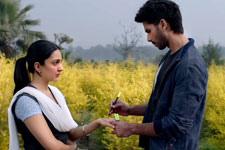 T J Reddy / fullhyd.com
EDITOR RATING
5.0
Performances
Script
Music/Soundtrack
Visuals
6.0
3.0
7.0
7.0
Suggestions
Can watch again
No
Good for kids
No
Good for dates
Yes
Wait to rent it
Yes
When asked about what they would change in regard to their films, most filmmakers say, "I'd still be stuck in a dark room with my editor ironing out scenes again and again and again till I get them right. The only reason the film is being released now is that there is a pre-set release date." The opportunity afforded to writer/director Sandeep Reddy Vanga when helming Kabir Singh is one in a million. He was given a chance to comb through Arjun Reddy, identify its strengths and shortcomings, and make his retelling of that story, better. The million-dollar question now is, "Did he do it?"

That light-hearted rendition of the plot is a thinly-veiled attempt to mask the horrors of this story. We will spare the morality lesson most of you may have heard from a million other sources, and pose two relatively simple conundrums instead.

Numero Uno: Kabir Singh's initial lashing out is a direct consequence of Preeti's parents' disapproval. For the first time in his life, his will has been opposed. He reacts by threatening her sister, calling her worthless, and physically assaulting her. Now imagine a scenario where Preeti says NO to him during one of their initial exchanges - what do you think our "hero" would have done to her?

Numero Deux: During the film's opening credits, Kabir's grandmother tells us a story of a doll he loved as a child. A doll draped in a white gown. Preeti is dressed in white when we are introduced to her. Kabir sets his eyes on her, likes her and refuses to let go. The character of Preeti lacks agency of any sort. She is at the mercy of the men in her life throughout the course of the film. Now, we ask you to draw a distinction between Preeti and Kabir's doll.

While we let you marinate in those troubling questions, let us break this film down, as a film and not much else.

After sitting through Kabir Singh, we rewatched key scenes from Sandeep Reddy Vanga's original to decipher an answer to the aforementioned million dollar question. In simple terms, our findings led us to a conclusion that had us favouring the original more than the remake.

For starters, in Kabir Singh, Sandeep Vanga takes over editorial duties from Shashank Mali and does away with some crucial scenes which added a layer of humanity to the title character's madness. Gone is the scene where Arjun brought a sexist NRI down to Earth which in turn helped us see the growth in him, gone are the tears of vulnerability Arjun's eyes welled up with as he pummelled his rival after the latter misbehaved with his lady love, and gone is the confrontation with his friend Kamal, a short scene that told us so much about Arjun's obsession using just so few lines.

With those three key scenes lopped off, Kabir Singh feels more like a story of a child throwing his toys out of his pram as a result of a hissy fit rather than the story of a man consumed his inherent toxicity.

Then again, all is not lost. Sandeep Reddy Vanga's rage-fuelled identity is unmistakably evident throughout this film. This story is wholly and solely from his perspective, and can only be told by him. Any person that has borne witness to the Tamil remake's trailer will say as much. The kinetic energy flowing through the movie is akin to the gallons of alcohol coursing through the young master Singh's veins. The film refuses to stop, refuses to apologise, and refuses to take prisoners just like its lead character. It is an alcohol-soaked masterclass in self-loathing that is easy to like or hate but hard to ignore.

Another thing that is hard to ignore is how tailor-made Vijay Devarakonda was to Arjun Reddy and how Shahid Kapoor's performance, while competent, fails to match up when compared with the original. That gleam of wonder Devarakonda's rendition of the character had in his eyes after losing his virginity to Preeti, that latent sense of self-aware joy tucked behind his blatant self-destruction and that display of uber-masculinity are lost in Kapoor's rendition. He is good but not memorable. He is watchable but not arresting. And because of that, the flaws in his film are that much harder to ignore.

The actors around him essay their roles satisfactorily as well. Kiara Advani, Suresh Oberoi and Sohum Majumdar are all serviceable as the agency-free Preeti, the eternally powerless father and the doting yet one-line-spouting friend respectively. Arjan Bajwa, however, rises above his underwritten role and delivers a solid cameo as Kabir's brother Karan.

Also rising above the norm are the film's distinct colour scheme, its exquisite shot structure, and that pulse-pounding background score by Harshvardhan Rameshwar (who also scored the original). When working in tandem with the chartbusting soundtrack, these filmmaking elements try to make a problematic tale palatable.

Simply put, Kabir Singh, the movie and the character, are akin to Kabir Singh's motorcycle of choice, The Royal Enfield. It is a gas-guzzling, hard-to-handle, needlessly heavy, inherently noisy and exorbitantly expensive piece of work that has been loved by the masses because of its glossy marketing. It is a MAN's bike DAMN IT! And we will love it even if it takes us and the planet to hell in a handbasket. 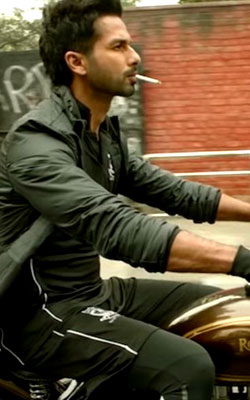 See Kabir Singh full details
TOP COMMENT
TJ Reddy on 23rd Jun 2019, 7:29am | Permalink
Ah, TCMG. It
4
0
KABIR SINGH USER REVIEWS
1 - 2 OF 2 COMMENTS
POSITIVE  |  NEGATIVE |  NEWEST  |  OLDEST  |  MOST HELPFUL  |  LEAST HELPFUL
USER RATING
1.0
1 USER
Performances
Script
Music/Soundtrack
Visuals
NA
NA
NA
NA
Can watch again - NA
Good for kids - NA
Good for dates - NA
Wait to rent it - NA
TJ Reddy on 27th Jun 2019, 5:35pm | Permalink
Park Chan-Wook gave me an 11/10 movie with Oldboy. I cannot in good conscience say any movie apart from Parasite reaches that level, for me personally. But everything else around that centrepiece is always a 9 or 10. I connect personally to all his films. For example, in Lady Vengeance, I so vividly remember the colour palette going from B&W to colour (or colour to B&W depending on the version you watched) and being so drawn into the storytelling because of it. I didn
The Common Movie Goer on 22nd Jun 2019, 4:51pm | Permalink
Both Arjun Reddy and Kabir Singh deserve a fat 0.0 if you ask me. Don't understand why any self-respecting 25+ year-old would mope around for a woman who has exactly zero redeeming qualities. Scratch that, don't know why any woman would fall for a guy with zero redeeming qualities to begin with (academics don't count). Come to think of it, I guess this is in fact a tale of two losers who fall for each other.

Why Devdas and it's derivatives apart from DevD are revered, I will never know. It's one thing if all these sad protagonists broke up after getting married and have to restart all over again. These are people in the prime. Just move on, damn it!

Apart from the story, the movie also promotes all the worst qualities and habits that would never help any individual get ahead in life. Unrestrained anger? Check. Lack of professionalism? Check. Drugs, smoking, and alcohol? Check. Lack of respect for other human beings? Check.

There is also a scene which shows sexual assault at knife point. Seriously, why this will go onto become a box office success is beyond me. Hope we get some good movies soon.
RATING
1
TJ Reddy on 23rd Jun 2019, 7:29am | Permalink
Ah, TCMG. It
Siva on 24th Jun 2019, 3:51pm | Permalink
Was looking forward to Bong Joon-Ho's next film, being a big fan of his "mother". Glad to know that the new one is being well appreciated too.

On the other hand, just like how you referred to the original while writing this review, I referred back to Josh's original review which was probably the best reading of the movie, lot to like and lot that makes you feel uneasy about the "hero's" behaviour. We have all seen guys like Arjun reddy when we were in schools/colleges in our lives and hoped that they will learn their lessons some day, not be rewarded for their bullying behaviour. But then that's how the director chose to make it and its his choice.

To be fair, your review does as good a job as Josh's, if not better.
TJ Reddy on 24th Jun 2019, 7:37pm | Permalink
Your kind words are always appreciated Siva.

Agree with you completely regarding Arjun Reddy/Kabir Singh's reading. It is unique to every audience member for sure. Hence, while writing about it, I realised that spoonfeeding a moral lesson is the worst thing one can do. The goal is to offer a different perspective and not to tell someone How or What to think.

That being said, the calibre filmmaking cannot be igonred and if I did, I wouldn't be doing my job well.
Siva on 27th Jun 2019, 2:14pm | Permalink
Recently, watched The handmaiden, loved it. That twist in the first hour was mind-blowing.

ADVERTISEMENT
This page was tagged for
sexistnri
kabir singh on rent
Kabir Singh Hyderabad theatre
Kabir Singh hindi movie
Kabir Singh reviews
Follow @fullhyderabad
Follow fullhyd.com on
About Hyderabad
The Hyderabad Community
Improve fullhyd.com
More
Our Other Local Guides
Our other sites
© Copyright 1999-2009 LRR Technologies (Hyderabad), Pvt Ltd. All rights reserved. fullhyd, fullhyderabad, Welcome To The Neighbourhood are trademarks of LRR Technologies (Hyderabad) Pvt Ltd. The textual, graphic, audio and audiovisual material in this site is protected by copyright law. You may not copy, distribute, or use this material except as necessary for your personal, non-commercial use. Any trademarks are the properties of their respective owners. More on Hyderabad, India. Jobs in Hyderabad.