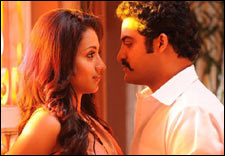 Deepa Garimella / fullhyd.com
EDITOR RATING
5.5
Performances
Script
Music/Soundtrack
Visuals
8.0
5.0
7.0
5.5
Suggestions
Can watch again
No
Good for kids
No
Good for dates
No
Wait to rent it
Yes
In Boyapati Seenu's films, it's always raining men - an art form that Dammu takes to a whole new level.

We aren't only referring to the moaning, bloodied, wounded, half-dead men who fall from the skies after the hero has kicked them. In Dammu, male aggression is mainly displayed in its central premise, one that extols the role of men in "protecting" society, and how this particular royal family is incapable of dignity merely because it doesn't have a male child. The film doesn't say this explicitly, but it implies that women basically don't count. Except to sleep with the men and make babies.

But enough of the snobbish feminism already. Let's, for a moment, ignore what Dammu doesn't stand for, and instead, talk about what it is. The movie is primarily aimed at male audiences that like their violence physical and gruesome, and that enjoy their self-exploding jeeps and Tata Sumos. Sometimes, it is fascinating to see Boyapati contradict himself and this pitch of macho belligerence. For example, his villain is more bad-ass than some recent villains, but has a convenient change of heart in the climax.

It's not all bad, though. Dammu is also one of the very few Telugu movies, in recent times, that actually has the hero cry. The sensitive side of a rough-and-tough hero is a nuance that is never explored in our films, and so, NTR Jr. shedding tears in the midst of this blood bltizkreig is a bit of a surprise.

Dammu is seemingly a simple drama detailing the rivalry between two warring feuds, but depends heavily on the characterization of the people in the story. Jr. NTR plays a 25-year-old who chances upon a dangerous, simmering family feud that threatens the lives of several villages. Post-interval, after the characters have been established, the killing begins.

Dammu seems to have been made with the wrong lessons from Simha, which was a package that worked for a bunch of reasons. Even though Dammu is well-presented, and several dialogues shine, one problem with it is that its plot is very medieval. It portrays a kind of factionism that is getting old, and doesn't look at things like contemporary movies do. For all its preaching about how killing is not good, there's never any smart way around the problems in the movie - the story is only about finishing off your enemies.

When the plot does twist and turn, it does so merely to expose yet a cliche or something illogical. The scene where several revelations are made about Vijay's (the lead) origins, is bound to elicit groans from the audiences.

Also, there's too much melodrama. True, Boyapati is great with emotion and drama, and knows how to create grand auras around his important characters - as is evident in Dammu's family scenes. But what he does here is drag the theatrics out till you no longer care for the people on screen, and drag the fights out till you've lost count of who's getting whipped. In addition, even though the comedy had great potential, with NTR leading all acts, but both Brahmanandam and Ali are wasted.

The actors, in general are not a problem here, unless you're counting Karthika. NTR displays zeal, and is good with the dialogues and the heroics. But he noticeably does not have the star stature to pull off the innumerable political speeches that are getting extremely blatant now (ever consider becoming the official Telugu Desam brand-manager, by the way, director?).

Most other actors have well-written roles - including Suman, Venu and Kota Srinivasa Rao - and are delightful to watch, but the second half has very little of them. Although Bhanupriya is left silently weeping all through, without make-up, her Gandhari-esque screen presence packs a punch. The heroines are in this only for the songs, and there is absolutely no romance. Trisha, thus, has been grossly wasted.

Dammu comes loaded with a grandiose background score - the loud chants and trumpets do get tiresome in the second half - that is in keeping with the tone of the film. Also, the cinematography is quite striking. But Keeravani's music for the mass numbers only serves to accentuate the offensiveness of the lyrics.

To be fair, Dammu did entertain us, but the interval changed things. Watch it if you're game, or a fan.
Share. Save. Connect.
Tweet
DAMMU SNAPSHOT 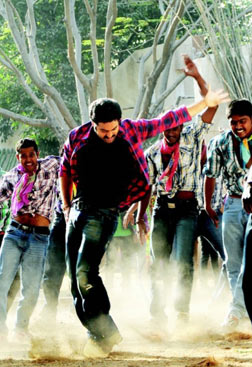 See Dammu full details
TOP COMMENT
Arjun on 27th Apr 2012, 7:33pm | Permalink
Looks like the typo has been fixed now, but I ROFL'ed thinking what the sentence would have been with the misspelling, and the word 'men' replaced with 'women'. LOL. You never know what the Young Tiger is capable of. And this is a "mass" Telugu movie on top of that. "Amma thodu, addamga naakestha". Hahaha.

I think the world would be such a better place if more people learnt to chillax, but that's for another day, another time.
4
1
DAMMU USER REVIEWS
1 - 5 OF 5 COMMENTS
POSITIVE  |  NEGATIVE |  NEWEST  |  OLDEST  |  MOST HELPFUL  |  LEAST HELPFUL
USER RATING
5.3
12 USERS
Performances
Script
Music/Soundtrack
Visuals
8.7
5.0
8.0
7.7
Can watch again - No
Good for kids - No
Good for dates - No
Wait to rent it - No
venkat on 11th May 2012, 8:26am | Permalink
same story
Arjun on 27th Apr 2012, 7:33pm | Permalink
Looks like the typo has been fixed now, but I ROFL'ed thinking what the sentence would have been with the misspelling, and the word 'men' replaced with 'women'. LOL. You never know what the Young Tiger is capable of. And this is a "mass" Telugu movie on top of that. "Amma thodu, addamga naakestha". Hahaha.

I think the world would be such a better place if more people learnt to chillax, but that's for another day, another time.
Editor on 27th Apr 2012, 6:39pm | Permalink
@phaneendra: "licked" is slang for "beat up", just like "creamed", "skunked" etc. Cheers,
Phaneendra Pappu on 27th Apr 2012, 5:44pm | Permalink
I have got nothing to say against "Dammu" as a movie. I am here to write about the review.

We somehow used to like the fullhyd.com's reviews in the past. And that's the only reason I am coming back here for them. But recent history says that times have changed and forcing us to move on. The quality of reviews has dropped and now, even the language.

Look at the second line of the article. "hero has "LICKED" them...

I know that K and L are next to each other, but hello!!!, the mistake changed the whole meaning of heroism here. (Pun not intended).

Any way, please make sure that these are not repeated, for heaven's sake...

All the best!!!
Kishore on 27th Apr 2012, 4:19pm | Permalink
Saw Jalsa on TV last night one more time. That made Dammu this morning doubly disappointing - a movie you can avoid as many times as you can watch Jalsa.

Boyapati Srinu takes all the wrong parts of his previous hit Simha (read the excessive gore) and gives them what they missed out on in Simha - a full movie. Dammu lacks a credible script, a iota of originality or creativity, and any logical integrity. Add to this a below average visual experience, complete lack of romance and comedy, and plenty of adult lines, and you have a movie that requires, well, dammu to watch it.

Most people say the first half is good, but I dispute even that. It is only relatively good, and that is not saying much. The whole setup is so clich

ADVERTISEMENT
This page was tagged for
telugu dammu full movie
Dammu telugu movie
Dammu reviews
release date
Jr. NTR, Trisha Krishnan
Follow @fullhyderabad
Follow fullhyd.com on
About Hyderabad
The Hyderabad Community
Improve fullhyd.com
More
Our Other Local Guides
Our other sites
© Copyright 1999-2009 LRR Technologies (Hyderabad), Pvt Ltd. All rights reserved. fullhyd, fullhyderabad, Welcome To The Neighbourhood are trademarks of LRR Technologies (Hyderabad) Pvt Ltd. The textual, graphic, audio and audiovisual material in this site is protected by copyright law. You may not copy, distribute, or use this material except as necessary for your personal, non-commercial use. Any trademarks are the properties of their respective owners. More on Hyderabad, India. Jobs in Hyderabad.