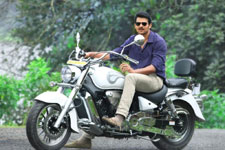 Kritika Deval / fullhyd.com
EDITOR RATING
6.5
Performances
Script
Music/Soundtrack
Visuals
7.0
6.0
7.5
7.0
Suggestions
Can watch again
Yes
Good for kids
Yes
Good for dates
No
Wait to rent it
No
For the most part, Mirchi seems hell bent on reinforcing how good-looking Prabhas is. Perhaps the makers are preaching to the choir, though, for you hear a deafening chorus of cheers and whistles every time Mr. I'm-Tall-And-Handsome-And-I-Know-It steps in the way of the viewfinder, regardless of reiteration from dialogues like, "Ninnu aadapillani chooskunnattu chooskovalsostundi," said by Jai's (Prabhas) disgruntled mother (Malayali actress Nadhiya, very polished).

For the rest, though, it makes up with skill, and an intimate knowledge of what makes the average viewer tick, for what it lacks in terms of original thinking of any kind.

Mirchi is a story of faction politics and how it makes life hell for all involved. It is a tale of how violence takes over one's life until you forget what caused you to pick up the sickle. It is a tale of patience, kindness and redemption. Of relationships, and oh, many other things that slip through. Above all, it is a tale of how awesome and gorgeous and good and kind and manly and... Prabhas' character is.

Nothing nirvana-inducing, right? Well, the writer doesn't want to give you a revelation. He just wants to give you an enjoyable couple of hours, and mint some greenbacks in the process. That, Mirchi pulls off in a jiffy.

The plot moves along briskly most of the first half, keeping you involved through all the muscle-flexing, smart-mouthing, and waist-watching (we mean that literally, not the kind where you have oatmeal and other unmentionables for breakfast). The waist in question belongs to Richa Gangopadhyay, playing the pretty-but-thespically-challenged NRI Maanasa.

The scene soon shifts to Palnadu, as Jai tags along with Maanasa to her home, and you start seeing red with greater frequency (no, we don't mean that you'll get pissed off. We at fullhyd.com are very literal).

As we move towards the second-half, it is time for that other stalwart of Telugu cinema, "family sentiment", to take over the show, and my, oh, my! It did! (We swear we could hear sniffles from somewhere in the row occupied by rowdy college boys).

Post half-time, things get a tad slow, as Prabhas goes into a flashback of his motives for going to Palnadu, on the flimsiest of pretexts (read: because Richa asks him to marry her). Superlative acting by Sathyaraj as Prabhas' father Deva, and Nadhiya, save the day, until the wonderfully portrayed romance between Jai and spirited village belle Vennela (Anushka) takes over.

From the villages of Guntur to an idyllic version of Hyderabad that its citizens rarely ever see, this love story of Prabhas and Anushka is one of stolen glances and secret hand-holding, the kind that, unfortunately, isn't seen very often today. The actors look good together, and share a great chemistry.

Prabhas - whether as college boy, lover-extraordinaire, or the manly-man in Guntur - is first and foremost Prabhas, but manages to bring a surprisingly nuanced performance to the table.

Anushka is a wonderful actor, and brings meaning to a role that could very easily have slid into the category of window-dressing, to which category Richa's role belongs. The screenplay would've benefited more time given to Anushka instead of bringing her in only a little while after the interval.

Sathyaraj plays with your heartstrings like a virtuoso. The quiet joy when he meets his prodigal son, his anguish when the son turns out be the embodiment of everything he despises, all of this and more is portrayed with delicate dignity.

At the end of it all, in Mirchi, dialogue is king. It may not have you rolling on the floor in splits, but it is clever, it is slick, and it is apt.

The so-called comedy tracks involving the ubiquitous Bramhanandam, and Satyam Rajesh elicit the bare minimum of laughs required of them.

The action sequences are skillfully shot, although, like a majority of Telugu movies, they require you to hang your disbelief several feet high. The amount of blood spilled does mandate that the viewer not be squeamish of stomach, though.

The background score and music by Devi Sri Prasad are catchy, and a couple of tracks, like "Pandaga La Digi Vachchadu" and "Kaatuka Kallanu Chooste" will stay with you for quite sometime, especially the latter.

All in all, if you want to go out en famille and have a good time, by all means go watch Mirchi. You might not remember it for years to come, but you will not be disappointed either.
Share. Save. Connect.
Tweet
MIRCHI SNAPSHOT 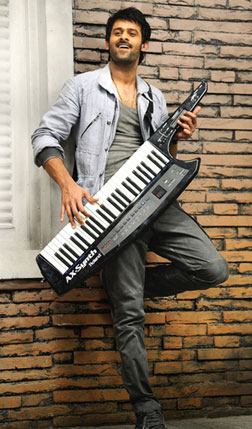 ADVERTISEMENT
This page was tagged for
mirchi movie
mirchi movie language:en
mirchi
Telugu.mirchi.move.diloegs.com
mirchi telugu movie
Follow @fullhyderabad
Follow fullhyd.com on
About Hyderabad
The Hyderabad Community
Improve fullhyd.com
More
Our Other Local Guides
Our other sites
© Copyright 1999-2009 LRR Technologies (Hyderabad), Pvt Ltd. All rights reserved. fullhyd, fullhyderabad, Welcome To The Neighbourhood are trademarks of LRR Technologies (Hyderabad) Pvt Ltd. The textual, graphic, audio and audiovisual material in this site is protected by copyright law. You may not copy, distribute, or use this material except as necessary for your personal, non-commercial use. Any trademarks are the properties of their respective owners. More on Hyderabad, India. Jobs in Hyderabad.