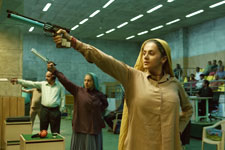 Punarvasu Pendse / fullhyd.com
EDITOR RATING
4.5
Performances
Script
Music/Soundtrack
Visuals
7.0
4.0
1.0
5.0
Suggestions
Can watch again
No
Good for kids
Yes
Good for dates
Yes
Wait to rent it
Yes
What would you do if you went to the shooting range with your sexagenarian grandmother, and not only did she shoot better than you, she got a bull's eye on her very first shot, the very first time she picked up a gun? Get her to shoot professionally, that's what!

Most of us first heard about the Tomar grandmothers, fondly known as the "revolver dadis" on Aamir Khan's television show Satyamev Jayate. I also wish Khan was associated with their cinematic story in some capacity, with how deftly Dangal was handled. Saand Ki Aankh is Tushar Hiranandani's directorial debut, and while he has plenty of writing credits to his name, this particular script is not his best effort, thanks to its surprising lack of balance.

Chandro (Bhumi Pednekar) and Prakashi Tomar (Taapsee Pannu) are two women from bumfuck nowhere in the middle of Uttar Pradesh, where patriarchy is so deeply entrenched that the men laze around smoking hookahs all day while the women toil in the fields. The two ladies encourage their daughters to shoot, because being professional markswomen would lead to them getting government jobs and allow them to escape this drudgery.

In a wonderful turn of events, both of them manage to hit the "saand ki aankh" (bull's eye) with their very first bullets, prompting the astounded coach Dr. Yashpal (Vineet Kumar Singh) to advise them to take up professional shooting. The rest is history, as Seema Tomar (Prakashi's daughter) became the first Indian to win any medal in her category at the World Cup in England in 2010.

Saand Ki Aankh is a story about two women that is told by men, and it fails the Bechdel Test, because almost every scene has them dealing with or talking about men. That being said, it is still a movie that does focus on the women it claims to represent, unlike many of the "female-oriented" films that have been released recently (looking at you, Akshay Kumar, looking at you). The male character in the story is only a catalyst in the women's stories, and at no point does he hog the limelight.

But Saand Ki Aankh has other problems. Two 30-something actresses portray women in their sixties (though we want to take nothing away from their performances). A movie that features perhaps the oldest female lead characters Bollywood has had would have been a perfect role for someone older, but Bollywood yet again declares that older women are not welcome. In contrast, men in Bollywood play leading roles well into their fifties (the aforementioned Mr. Kumar being a perfect example).

Besides this, Saand Ki Aankh also lacks consistency. Is it meant to be a dramatic reconstruction of a story to make it appeal to the masses, or is it a minimalistic, authentic tale presented by an auteur who wants to attract true lovers of the cinema? It appears to try to be both, and succeeds at neither.

The music/sound department on this movie is the most annoying I've experienced recently, with sounds that would shame the most atrocious stage "comedy" shows on Indian television. Every little witty moment which would otherwise make you marvel at the two women is punctuated by a sharp burst of sound which honestly would drive almost anyone nuts.

Bhumi Pednekar and Taapsee Pannu give powerhouse performances. It isn't easy getting the mannerisms of a sixty-year-old when you're young, but they make spirited attempts. This is in spite of prosthetics that aren't very consistent, and the controversy behind their casting. Vineet Kumar Singh too delivers another good performance after his spirited act in Mukkabaaz.

Saand Ki Aankh is a fantastic story told in a not-so-fantastic manner. Go for the lovable grandmas and their amazing spirit. The film may have its issues, but they nearly make up for it.
Share. Save. Connect.
Tweet
SAAND KI AANKH SNAPSHOT 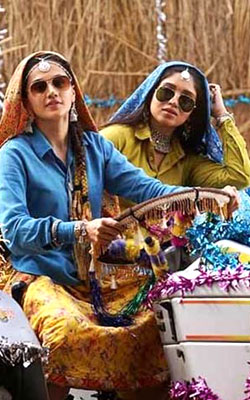 See Saand Ki Aankh full details
SAAND KI AANKH USER REVIEWS
1 - 1 OF 1 COMMENTS
POSITIVE  |  NEGATIVE |  NEWEST  |  OLDEST  |  MOST HELPFUL  |  LEAST HELPFUL
Regularly Irregular on 25th Oct 2019, 11:08pm | Permalink
Was the publisher of this article too bored to even publish it fully? The last sentence is incomplete. Someone missed the saand ki aankh doing their job well.
Punarvasu Pendse on 26th Oct 2019, 12:46am | Permalink
I'm sorry about this, will get it sorted asap.

ADVERTISEMENT
This page was tagged for
sand ki aankh watch online
saand ki aankh full movie
rdx movies saand ki aankh movie
saand ki aankh movie full in hindi downtown
Bhains ki aankh movie full in hindi downtown
Follow @fullhyderabad
Follow fullhyd.com on
About Hyderabad
The Hyderabad Community
Improve fullhyd.com
More
Our Other Local Guides
Our other sites
© Copyright 1999-2009 LRR Technologies (Hyderabad), Pvt Ltd. All rights reserved. fullhyd, fullhyderabad, Welcome To The Neighbourhood are trademarks of LRR Technologies (Hyderabad) Pvt Ltd. The textual, graphic, audio and audiovisual material in this site is protected by copyright law. You may not copy, distribute, or use this material except as necessary for your personal, non-commercial use. Any trademarks are the properties of their respective owners. More on Hyderabad, India. Jobs in Hyderabad.