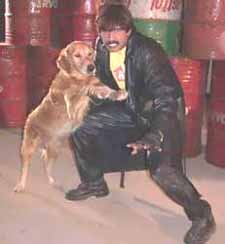 Arpan Panicker / fullhyd.com
EDITOR RATING
1.0
Performances
Script
Music/Soundtrack
Visuals
NA
NA
NA
NA
Suggestions
Can watch again
NA
Good for kids
NA
Good for dates
NA
Wait to rent it
NA
One just can't resist asking, "Which one is the dog?" The only hint that Thriller Manju is playing an ACP and not the dog is that the dog of the movie is quite dignified. Anyway, sorry for having brought this up and offending the canine race.

The story starts off with a girl Rekha causing trouble for a roughneck Ajay Verma who gets someone else to write an exam for him. Ajay Verma gets back at her by knocking off her dad and mom, conking her boyfriend on the noggin and teasing her dog. He rounds it off by carrying her away. The boyfriend conveniently passes off into a coma, and her granddad is left to agitate the cops into action.

After three months he manages to corner ACP Agni (Thriller Manju) with the help of Deputy Collector Siddhartha (Vinod Kumar) and the DC's sister Bhavani. The ACP has so far been picking his nose while the criminals have been roaming around scot-free. He provides an explanation for this using a convoluted flashback that has his wife getting killed, and like the fire-fearing burnt child, he stops crime-fighting in order to keep his daughter safe.

All the good guys and dogs get together and uncover a network of interconnected scams among which are:

1. Girls being kidnapped and used in blue films,
2. Them getting murdered after they have served their purpose, and their organs being sold,
3. HP gas cylinder piracy, and
4. Feeding politicians with the green stuff.

We could go on, but we are sure you have got the gist by now. By the end of the flick, the villains are beaten up and bitten off separately for each crime, and what's left of them is locked up. And for once, it's just not in me to say 'All's well that ends well'.

There isn't a single redeeming factor and the movie is totally intolerable. You may just be able to sit through the scenes where the dog's there if you like dogs so much, but with Thriller Manju to contend with, that's not advisable. The actors seemed to have been told it's an open house, and act accordingly. The technical points are used almost exclusively for highlighting the fights.

The movie has an amazing byline: "Sometimes... Man fears... But dog dares!" Put a dog in a movie and hundreds of men will watch it. Put Thriller Manju in a movie - will a single dog watch it?
Share. Save. Connect.
Tweet
POLICE DOG SNAPSHOT

ADVERTISEMENT
This page was tagged for
Telugudogsbluefilms
Police Dog telugu movie
Police Dog reviews
release date
Thriller Manju, Vinod Kumar
Follow @fullhyderabad
Follow fullhyd.com on
About Hyderabad
The Hyderabad Community
Improve fullhyd.com
More
Our Other Local Guides
Our other sites
© Copyright 1999-2009 LRR Technologies (Hyderabad), Pvt Ltd. All rights reserved. fullhyd, fullhyderabad, Welcome To The Neighbourhood are trademarks of LRR Technologies (Hyderabad) Pvt Ltd. The textual, graphic, audio and audiovisual material in this site is protected by copyright law. You may not copy, distribute, or use this material except as necessary for your personal, non-commercial use. Any trademarks are the properties of their respective owners. More on Hyderabad, India. Jobs in Hyderabad.