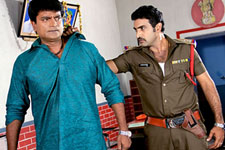 Kritika Deval / fullhyd.com
EDITOR RATING
2.0
Performances
Script
Music/Soundtrack
Visuals
2.5
2.0
2.0
1.0
Suggestions
Can watch again
No
Good for kids
No
Good for dates
No
Wait to rent it
No
Eduruleni Alexander, they call him. Who are they? Well, we're guessing the little invisible people around Tarakaratna that are set atremble whenever he tries to emit his grandfather's voice from his unwieldy mouth. You see, Tarakaratna (oh, please call me Tarak!) plays Alexander, a cop who apparently shoots more than he talks, but, considering how much he talks, should have emptied the world of its bullet supply.

It isn't that we have a problem with the shooting. The problem is with the talking. Mr. Tarak's talking, here, is quite amusing at the beginning, i. e. until you realize how bat-shit insane the things he's saying are, and that you're probably going to have to listen to a lot of it considering how he obviously means to take his family's penchant for "dialoguing" one step further. How? By stopping to pose everytime he's done punching a line into the air.

So, anyway, he does all of this in the midst of a story, of course. Alexander is a Vizag cop whose definition of justice is talking the ears off of anyone who might be in his vicinity, and then ridding cities of what appear to be the most moronic of crimelords, by orchestrating even more moronic encounter situations. One such situation too many later, Alexander finds himself transferred to Hyderabad, and very soon on the cusp of a human trafficking racket involving college students.

Meanwhile, three college boys new to town are finding their bearings, and eventually find themselves living on top of a ladies hostel. What does this have to do with Alexander's story? We don't quite know. Except that it has something to do with the human trafficking part.

Also, there is Komal Jha, who really cannot act to save her life, but tries to make up for that with a willingness to thrust her "assets" out and keep them in constant contact with our hero.

There. We just gave you the LCD of everything that goes into making a truly bad movie - one entitled boy from movie royalty, one half-baked crisis, one "wacky twist", and one skimpily clad mannequin.

Wait. We're missing something. Oh, yes. Dialogues written as though just before passing out, music that will certainly never be heard outside of the theatre, "fight scenes" involving more of the mannequins, and a few more skimpily clad ones.

The thing about this movie is that it is the kind of awkward bad that you can't help but sympathise with. There should be a word for this specific kind of bad. The kind that makes you slap your forehead as you groan out loud, even as you think that maybe things could've been worse. However, things really cannot get too much worse than a film that thinks a gay guy with yenakala as his catch phrase is the epitome of humour.

Our advice? If you find yourself stuck outside on a hot, sunny day, with a theatre playing this film being your only chance for shelter in the vicinity, you'd do better to move on and look for an option that won't give you a raving headache.
Share. Save. Connect.
Tweet
EDURULENI ALEXANDER SNAPSHOT 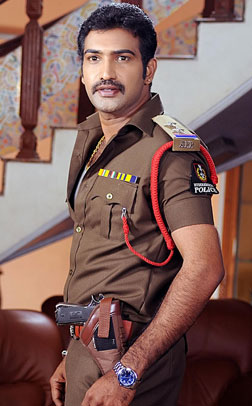 ADVERTISEMENT
This page was tagged for
Eduruleni Alexander telugu movie
Eduruleni Alexander reviews
release date
Nandamuri Tarakaratna, Kumkum
theatres list
Follow @fullhyderabad
Follow fullhyd.com on
About Hyderabad
The Hyderabad Community
Improve fullhyd.com
More
Our Other Local Guides
Our other sites
© Copyright 1999-2009 LRR Technologies (Hyderabad), Pvt Ltd. All rights reserved. fullhyd, fullhyderabad, Welcome To The Neighbourhood are trademarks of LRR Technologies (Hyderabad) Pvt Ltd. The textual, graphic, audio and audiovisual material in this site is protected by copyright law. You may not copy, distribute, or use this material except as necessary for your personal, non-commercial use. Any trademarks are the properties of their respective owners. More on Hyderabad, India. Jobs in Hyderabad.