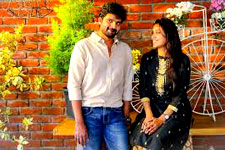 T J Reddy / fullhyd.com
EDITOR RATING
7.0
Performances
Script
Music/Soundtrack
Visuals
9.0
8.0
7.0
5.0
Suggestions
Can watch again
Yes
Good for kids
No
Good for dates
Yes
Wait to rent it
No
You know what we love? Love. No matter how many of the stiff-upper-lipped critics say the genre has outlived its welcome, we still watch romances, and they still make money. Simply put, man is a social animal, and social animals need companionship, or at least stories about companionship. Watching a good story about said companionship play before our very eyes reminds us of the warm and fuzzy sensation it induces. Because we want somebody to love and we need somebody to love us. And as soon as the end credits roll, we are hell-bent on finding that somebody to love.

Saying he has the story to make us feel all the aforementioned emotions is writer/director Vivek Athreya. He told his story to the people who brought you Pelli Choopulu, and they seemed to like it well enough to bankroll it into a full-fledged feature film.

Mental Madhilo follows that stage between B. Tech. and marriage for many young men. The ones working 9-to-5 jobs, having no idea of how to speak to the ladies, being unwillingly pushed into #pellichoopulu by their over-controlling yet loving parents, and totally clueless about dealing with all of that, just nodding and getting hitched.

For Arvind Krishna (Sree Vishnu), these traits are amplified n-fold. The man has literally one shirt in his wardrobe because he goes into a mental meltdown if he has any options at all. He cannot make choices. Fortunately for him, the first 13 candidates of his pelli choopulu spree have rejected him instead of the other way round.

Just as it looks like he'll get relegated into the ether of eternal bachelorhood, Arvind meets Swechha (you'll love that name and what it symbolizes for the story), played by Nivetha Pethuraj. Her ease with his anxiety and indecisiveness and his insistence on frank discourse leads them to form a liking for each other. They evade many romantic movie clichés thanks to their excellent chemistry, come close to getting into marital bliss.

But their luck runs out close to the intermission as Arvind needs to move to Mumbai for work. With Swechha left behind, Arvind's propensity for indecision goes unchecked, and you are witness to the true extent of his very distinct problem.

The first half of the movie is a case study on how to write and execute a romance fuelled simply by on-screen chemistry and sharply written dialogue. The film has no slapping of friends, dancing/singing women, excessive drinking, navel displays, loud dramatic fights or double entendres. I didn't even know this was legal in this day and age.

Being a guy in his mid-20s, I found the first half quite similar the many stories I witness on a daily basis. My friends and I barely beat up a gazillion bad guys, nor do we treat the women in our world like defenseless children. We are young people living in a world filled with quirky characters, and work with each other to make a better life for all. Arvind and Swechha slot in this world perfectly, and that's what makes them so relatable and an utter delight to watch. A lesser film would revel in the clichés this one throws to the side. Its primary focus is on character sketching, and it puts two brilliantly fleshed-out, three-dimensional, mature people on screen.

Soon after the breezy first half, though, the movie moves itself and its couple out of this blissful zone and abandons them in a strange new place with three new characters. And the film's pace and refreshing approach suffer greatly. The second act, while short and still full of great character work, is a tad too rushed, to accommodate the time constraints. This leaves a lot of the organic character growth and the protagonist's primary kink by the wayside.

But the trio of lead actors Sree Vishnu, Nivetha Pethuraj and Amrutha Srinivasan elevate the material by sheer skill. Their interactions are light and lovable. None of them is loud, be it with words or in clothing. They are what we call a muh-tod-jawab to every second person who thinks being an artist is somehow more fulfilling than being an engineer. The actors find the humanity and levity in the mundane, and convey it through both their body language and their words.

Their actions, words, tribulations and moments of clarity are scored to near perfection. While the songs might not work as well without the context of the film, in the world of the film itself, they fit with their respective scenes like Lego pieces clicking together. Unfortunately, the movie is visually uninspired, and the actors and musicians need to build the mood and tone for it. The warmth and general likeability do not flow through onto the screen, which results in the film's more sketchy moments sticking out like a sore thumb.

Analyzing a gentle movie such as this one to detail soon makes you realize that like life itself, it finds no need to be perfect. What begins as a romance can soon turn into a slice-of-life piece which can then morph into a coming-of-age story. This is life - you don't decide what you get. All you can do is make the best of what you're given. And now, it's up to you, dear reader, to make the best of what the poorly titled Mental Madilo gives you in terms of cinematic entertainment.
Share. Save. Connect.
Tweet
MENTAL MADHILO SNAPSHOT 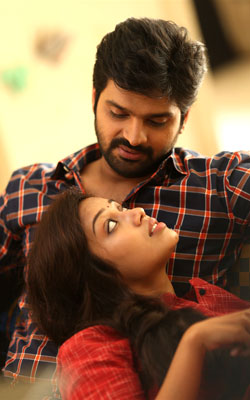 See Mental Madhilo full details
MENTAL MADHILO USER REVIEWS
1 - 2 OF 2 COMMENTS
POSITIVE  |  NEGATIVE |  NEWEST  |  OLDEST  |  MOST HELPFUL  |  LEAST HELPFUL
Raghu M on 4th Dec 2017, 11:07pm | Permalink
Thoroughly enjoyed the movie. The way the second half is interleaved with the second half of the first half, is beautiful. The subtle comedy here and there and the chemistry between the lead pair are cute too.
After a long time, Shivaji Raja gets a meaty role.
TJ Reddy on 4th Dec 2017, 11:10pm | Permalink
It's a dark horse candidate for being called one of the best Telugu movies of the year. It's sneakily good.
Siva on 29th Jan 2018, 11:26pm | Permalink
Finally watched the movie today. What a fantastic first half.

@TJ garu, somehow I just couldn't look beyond the first 5 minutes of the second half. Why is "Renu" talking to "Aru" as if she knew him for the last 2 years? Was it love at first sight for her? What exactly made Aru to lose his mind and become so desperate to find her? What was so mind blowing about her that Aru forgot about the first girl in his life in 1 hour? Why would she want to move in with him and his friends after talking to him just for couple of hours? Over the course of the month, while hero starts feeling attracted to her, why exactly is she attracted to him (invalid question if its love at first sight)? Swecha, an independent girl, forgives Aru, because of what, exactly (not saying she shouldn't) ? Can we adjust that since Renu was trying to overcome tragedy, she was behaving like that?

Wanted to love the movie, but couldn't go beyond these thoughts. Am I reading this whole thing wrong? Should I delete my fullhyd account?
TJ Reddy on 30th Jan 2018, 10:04am | Permalink
Your point is the reason this movie got a 7/10. As much as I reasoned with myself saying "Aravind is a guy whose mental state is prone to shifting constantly", I couldn't buy into his and Renu's relationship.

The film has to juggle his relationship with Swecha and his bubbling relationship with Renu and doesn't have enough in terms of time or story (in the second half) to carry it through. As you said, Renu's point of view is very understandable as in, she's looking for a newer better partner. Aravind cannot keep himself focused on one aspect of anything because of who he is. But their dynamic is one of one of them being the saviour and other one being saved.

There is a great way to do that but this is only passable. Once they get together, it smoothes out well.

With the film being a hyper-realised take on reality, I tend to give it a pass. Because when I've seen people get attention from the opposite sex for the very first time, they tend to lose all sense of control because it is a wholly different psycho-sexual experience. I like that the film used a narrative hook to show what most of us experience in our lives.

Sad to say it wasn't perfect. But the fact that it made you think about character dynamics, their choices, their mindsets and what you would have done in their shoes is what makes watching this film a worthwhile experience.

As you know, it is more than you can say for most films that come out on a weekly basis.
Hari on 26th Nov 2017, 5:13am | Permalink
I hated that title. But reading your review, it sounds like this is a movie I might like. Thanks TJ for the sale :)
This goes into my "one to watch" list.

-Hari.
TJ Reddy on 27th Nov 2017, 5:07pm | Permalink
Check it out, Hari. You may end up enjoying it a lot.
Hari on 5th Dec 2017, 7:44am | Permalink
Finally got to watch this and I must say TJ, you have good taste in cinema. I loved this movie. Nivetha Pethuraj was lovely. I read your review again after watching the movie and it is perfect. I liked Sree Vishnu in Second Hand(I must add, probably the only good thing BVS Ravi did to TFI was by producing that move). I wondered whatever happened to him(did not watch Appatlo Okadundevaadu). He adds character through his diction. I had a smile on my face the entire first half. Vivek Athreya should be proud of his writing. Wishing to see more of him in future.