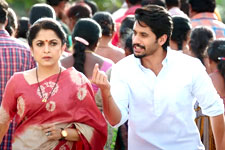 T J Reddy / fullhyd.com
EDITOR RATING
2.0
Performances
Script
Music/Soundtrack
Visuals
3.0
1.0
2.0
3.0
Suggestions
Can watch again
No
Good for kids
No
Good for dates
No
Wait to rent it
Yes
At the end of the second act of Sailaja Reddy Alludu, a random group of bad guys throw down an impotent monologue and get themselves ready to attack, and subsequently murder, Sailaja Reddy (Ramya Krishnan). To her credit, Madam Reddy stands her ground, tucks her pallu in and promises to unleash the wrath of hell on these brutes. We genuinely thought this colossal slog-fest of a film had a scene where Ramya Krishnan would kick names and take ass. We were primed and ready, with blood coursing through our veins and hands clutching our armrests.

One nameless henchman came close to Mrs Reddy with a sickle in hand. However, our wide-open eyes were not treated to what was promised. Instead, a brick flew into the frame and crashed against the henchman's head. As the brick crushed the henchman's skull, all the sins of this film came rushing back to our memories almost aping a cheap plot point from a subpar amnesia storyline in Kyunki Saas Bhi Kabhi Bahu Thi. Our eyes were subject to Naga Chaitanya walking into the shot in slow-motion, and right behind him was some lighting equipment the director and DOP forgot to block out of said shot.

"Why?" the movie asks. "Why did you expect any better from me? Are you a masochist? Do you enjoy having your heart is broken and soul shattered until it is nothing but fine powder?"

"I don't even want to toe the line of the status quo let alone surpass it," the movie continues. It boldly declares, "I'm here to worship heroes, objectify heroines, wildly misfire when it comes to my primary themes, and wrap all that up in a film so technically inept that I have a scene where my heroine sits in the rain but doesn't get drenched."

Set in both Hyderabad (first half) and Warangal (second half), Sailaja Reddy Alludu follows the life and times of Chaithu (Naga Chaitanya with a character name as original as they come) as he attempts to woo Anu (Anu Emmanuel running a twofer on originality) and subsequently convince both sets of parents as to why the two of them are meant to be together. The catch here is that the trio of Anu Emmanuel, Murali Sharma and Ramya Krishnan are all egotistical. Chaitu remains the one true believer in the goodness of humanity. He scratches, claws, fights and delivers multiple monologues (each one more unconvincing than the last) as he endeavours to help his loved ones understand the errors of their ways.

We are here asking you how his film is any different than the slew of other alludu films that have graced our screens in the past. What ground does this film cover that hasn't already been trodden on by Alluda Majaka, Alludu Seenu, Naa Alludu, Rowdy Alludu, Police Alludu, Peddinti Alludu, Maa Alludu Very Good, Allari Alludu, Goppinti Alludu, Bhale Alludu, Adhirindi Alludu and Mechanic Alludu?

The heroine is a pain in the ass because her mother is one, too. The hero employs garden variety ploys like helping poor people and hitting on the heroine's maid to woo said heroine. Once target one is acquired, he employs much more elaborate plans to warm himself up to the mother. However, in Sailaja Reddy Alludu writer/director Maruti Dasari uses the word EGO 1,398,265 times in a vain attempt to mask his ineffective screenplay and to set himself apart from the slew of movies we listed out earlier.

In a cruel twist of fate, one soon comes to understand that the director has no clue as to what Ego actually is. He seems to think that it's more contemptuousness than chutzpah. He hypothesises that it is more to do with pride than hubris, and he concludes that it's more stupidity than self-importance. Truth be told, we didn't expect much more from a man who used his flawed understanding of OCD to craft Mahanubhavudu.

Flawed understanding of the basic tenets of writing aside, one would hope that a mid-budget, star-kid-powered production would have the basics of filmmaking down pat. Well, if you were one of the unlucky souls who watched Naga Chaitanya's Yuddham Saranam, you'd know better. You know that he can't put in a decent performance without the aid of a director with a strong vision. This film contains scenes where we uncomfortably watched the leading man literally struggle to stand firmly on his own two feet. The direction given to him is so haphazard that his character moves from scene to scene with no discernible motivation whatsoever.

Anu Emmanuel, too, is seemingly incapable of mustering up a good performance in any film that is not titled Thupparivalan (Detective). Her two modes of operation are resting b***h face and unimaginative in-love face. Murali Sharma is a straight up cartoon character, and the film's mishandling of Ramya Krishnan might be its biggest sin. Having her dole out "mass" lines with a loud voice and gaping eyelids does little to mask her character's cancerous idiocy and ineptitude.

Ineptitude is also how one may describe the film's presentation. Terribly photoshopped images, poor CGI, lighting equipment scattered across multiple scenes, student-film levels of camera blocking and staging, blatant thievery of the Marvel logo, a beggar with an iPhone in his pocket, a despicable reuse of that iconic musical cue from Hello Brother, songs that pop up because the script said so and the distracting ADR all combine to make the experience of sitting through this movie a punishing one. There is so much caution thrown to the wind that we expect it to pollute the atmosphere before the exhaust fumes coming off our vehicles.

In conclusion, if all that we said through the course of this review aren't enough to adequately convey the quality of this cinematic equivalent of a dumpster fire, we may be as bad at our jobs as the makers were while rendering this film. Here's hoping our message gets through. Treat yourselves this Vinayaka Chaturthi by not watching this cash grab.
Share. Save. Connect.
Tweet
SHAILAJA REDDY ALLUDU SNAPSHOT 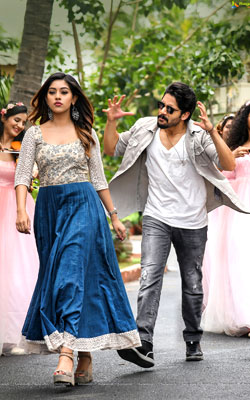 See Shailaja Reddy Alludu full details
SHAILAJA REDDY ALLUDU USER REVIEWS
1 - 2 OF 2 COMMENTS
POSITIVE  |  NEGATIVE |  NEWEST  |  OLDEST  |  MOST HELPFUL  |  LEAST HELPFUL
The Common Movie Goer on 20th Sep 2018, 12:19am | Permalink
Hahaha, hilarious review as usual, TJ (assuming you are TJ)! I have to admit, however, that I am a sucker for Alludu movies. I loved Alludu Seenu to death, literally ROFLed at the theatre. I also count Rowdy Alludu, Goppiniti Alludu, and a couple of other Alludu movies among my all time favorites.

I feel you were a little harsh on Naga Chaitanya. Guy proved his mettle in Premam. Save for his dialogue delivery in the movie, it was a flawless performance.

When you kept mentioning lighting equipment left on screen in multiple reviews, I thought it was a genuine mistake by the lighting team. Only recently did I realize that you were referring to the flashy lights that accompany the protagonist in songs and "elevation" scenes. I personally love lighting equipment being scattered.

I've traditionally hated Maruthi movies, and I know this will be no different. But I hope to catch it today so I can bitch about it later.

I do agree with you. Some of the Alludu movies are really fun to watch but the primary plot line (of which there are two) are done to death at this point. Nee kuthuruki mogudu and neeku ranku mogudu stuff is so very outdated. This movie tries something new but botches it so damn horribly that it makes little to no sense in the grand scheme of things.

And I guess the lighting equipment thing is a matter of taste. I never mind that in songs because it is meant to be a separate part of most films. Not tied into the narrative or the world.

But, in my opinion, lighting is meant to accentuate the actors and the scenery without making it obvious. It is almost like leaving a boom mic in the shot and saying that's what we used to get the on-set dialogue. Camera blocking is super important when making a film.

Most directors don't do that well and hence we end up with scenes where actors are shot as if they aren't even on set together at the same time. It's just a detail I tend to notice a lot and this film has a bunch of those basic errors.

Maruti seems like a director who wants to try stuff but never explores or researches a concept to a proper extent. The concepts themselves are very surface level.

ADVERTISEMENT
This page was tagged for
sailaja reddy alludu full movie in telugu
shailaja reddy alludu movie movierulz
shailaja reddy alludu telugu movie
shailaja reddy alludu full movie in telugu
radhika theatre ecil movies today
Follow @fullhyderabad
Follow fullhyd.com on
About Hyderabad
The Hyderabad Community
Improve fullhyd.com
More
Our Other Local Guides
Our other sites
© Copyright 1999-2009 LRR Technologies (Hyderabad), Pvt Ltd. All rights reserved. fullhyd, fullhyderabad, Welcome To The Neighbourhood are trademarks of LRR Technologies (Hyderabad) Pvt Ltd. The textual, graphic, audio and audiovisual material in this site is protected by copyright law. You may not copy, distribute, or use this material except as necessary for your personal, non-commercial use. Any trademarks are the properties of their respective owners. More on Hyderabad, India. Jobs in Hyderabad.